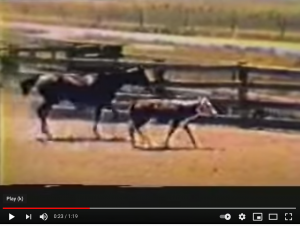 This week, we visited with Dr. Erin Hecht, assistant professor in Harvard University’s Department of Human Evoluntionary Biology. Hecht’s research on dog brains and how breed can manifest in canine neuroanatomy got our attention here.

We talked with her via email of the possible insights we might gain for equine neuroanatomy.

Here are our questions and Hecht’s answers:

Ranch horses are valued for their ability to move cattle quietly and react quickly to a changing environment, especially in response to cattle movement. Would you suspect that this trait is largely taught or largely in place neurologically speaking?

Here is a video that might help show you what these talented horses do, even without a rider: 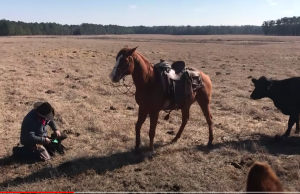 This horse outmaneuvers the mother cow without instruction

And then there is this horse, who keeps a mother cow away without instruction as the rancher tags her calf.

This is a very interesting question which could be answered with research!  Looking across the animal kingdom, some skilled behaviors are largely innate, with little learning required.  One example of this would be web-making in spiders.

In other cases, skilled behaviors rely heavily on experience and learning during an individual’s lifetime. An example here would be language use by humans.  But even in those cases, there are often innate biases that help facilitate learning – a predisposition to attend to certain aspects in the environment, or to be drawn to or to try to avoid particular situations.

In the case of human language learning, babies show early predispositions to attend to adults’ vocalizations and to babble, both of which probably help canalize their language learning along a productive path.

I would speculatively hypothesize that something similar might happen with ranch horses – some biases and predispositions are innate, and these shape individual animals’ learning experiences in a way that helps produce functional skill.

Gaited horses naturally have different stride rhythms than non-gaited horses. For instance, a Tennessee Walker has a “running walk” that is completely different than, say, a trot or canter in a quarter horse. Can this be explained neurologically?

This Icelandic horse is tolting or performing a flying pace

This page highlights studies which cover the genetic aspect of gaitedness, considered a widespread genetic mutation.

Also, temperament is a big deal in the horse world. Even the span of breeds is from “cold blooded” to “warm blooded” Cold blooded are draft horses who are typically big, slow, and calm, while hot breeds like Arabians are more slight-framed and flighty. Would you suspect that their brains look very different, based on their temperaments?

Hecht: All behavior, including gait and other forms of locomotion, comes from the nervous system. So, if you have two different types of animals with different behavior, then there must be something different about their nervous system!

In the case of our 2019 dog study (which you wrote a post about), differences in brain anatomy were pronounced enough to be measured with MRI.  But brain differences at a much finer anatomical level can also produce differences in behavior. For example, differences in the distribution of receptor types can alter the way that brain regions respond to different types of neurotransmitters.  This can produce noticeable differences in behavior – like whether a species forms pair bonds or not, for example – but it would only be detectable by examining brain tissue at a microscopic level.