Most of us will not pursue a neuroscience doctorate in between trail rides and hay tossings. But we can skim equine neurology’s surface to improve our horse-human connection.

We’ve talked about dopamine, the feel-good brain chemical. But there are scores of other chemicals in the brain. If those neurochemicals were kitchen ingredients, you could make cake, noodles, or hot tamales depending on the combinations. Recognize what’s going on in the brain and you can cook up something sweet or sour, healthy or unhealthy.

It’s challenging stuff. But take heart: equine brains are less developed than ours, so discussing their neurology is a bit less complicated.

When considering horse behavior and learning, it’s helpful to know about a few specific neurochemicals:

With just these four common neurochemicals in play, let’s consider some potential learning moments for horse and rider: 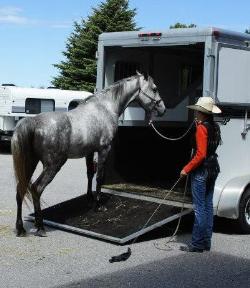 Depending on the horse’s behavior as well as your actions and reactions, any number of scenarios could unfold. There may be fear, fight, seeking, reward, flight, or bits of several of these elements.

The scenes are not two-dimensional. Your horse is not wired like a light switch; nor are all horses wired identically. They have different metabolic thresholds, learning frameworks, and memories. 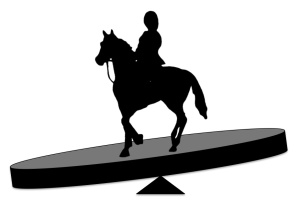 Picture instead your horse on a wobble board: 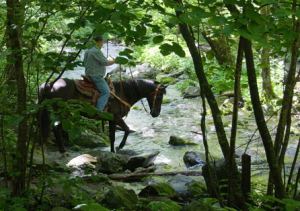 In these and most learning scenarios, horses rely heavily on their brain’s limbic system. That’s the center for emotions and memory related to survival and preservation. Within this region, the amygdala is instrumental in a horse’s fear reaction, which may often present itself in learning situations. The two almond-shaped amygdalae facilitate release of adrenalin and a sympathetic (fight or flight) response may occur. Read more about autonomic responses here.

But there is another crucial limbic system part called the nucleus accumbens. (Again, the limbic system involves feeling and reacting but not so much thinking.)

This group of neurons is associated with seeking and reward; the area is awash in dopamine.

Temple Grandin calls these seeking moments full of “Christmas present” emotion. “The anticipation of what you’re going to get is sometimes better than actually getting it.” Interestingly, researchers have pinpointed the nucleus accumbens as essential in the placebo effect. The greater the anticipation of pain relief, the greater the nucleus accumbens’ dopamine release, even when no actual chemical reduced the pain.

As you work with your horses, know that the key to positive outcomes is allowing your horse to seek a solution and be motivated by the reward (dopamine). Try to make every learning experience a positive one, since undoing bad experiences can be so challenging.

Sure, you can force him into the trailer and across the creek, but you’ve just tipped off the wobble board into fear territory. What has he learned? How will he consider things next time?

You’ve got your ingredients. Make something delicious and healthy.