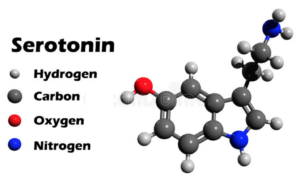 As a follow-up to the HorseHead article on serotonin, we visited with several renowned trainers for their observations and experiences around learning moments likely influenced by serotonin.

Keep this comment from Dr. Peters in mind as you read of their experiences: “Research on the effect of serotonin on learning seems to be showing that perhaps the key is not just searching out knowledge and getting a reward but being “safe” in the nervous system and having enough time in that “no stimulus” state to cement what they are actually learning and to make associations (i.e., long dwell times). Helping the horse to feel safe and find a place of internal security may play a huge role in how well they learn and the rate at which they learn.”

We spoke with Martin Black, horseman and co-author with Dr. Steve Peters of Evidence-Based Horsemanship. He recalled that when he was younger, he might have worked more quickly when colt starting. He realized, though, that there was no gain to be had with speed. It’s an especially hard lesson for horsemen to learn, especially if they are “warriors,” men used to muscling through challenges. 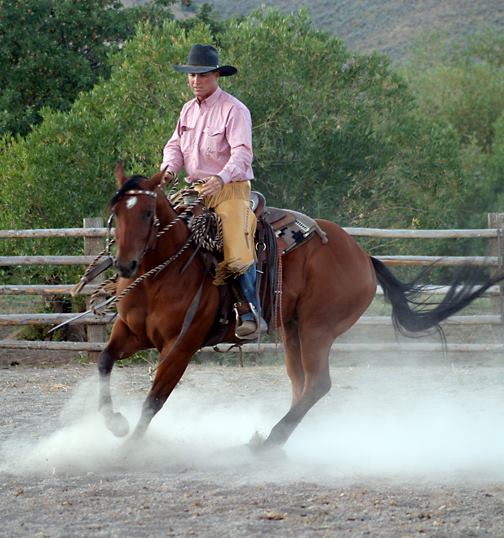 Take for instance a horse who’s stressed, whether in cow work or if it is being worked quickly while doing something, or perhaps with a colt in training, unsure and on high alert…After they experience those situations with positive outcomes, that’s when I’d wait for ten minutes rather than two minutes.

You can give the horse more time. It doesn’t cost anything. There’s no benefit to cutting it short. Extra time is well worth it.

I don’t like to give exact rules or anything. No two circumstances are going to be the same. But I’d rather sit there and twiddle my thumbs and have my horse rethink the experience they just had.

The quickest way to get to a good point is not with a short cut. If your time is too valuable, you shouldn’t be out there with horses anyway. For years, I’ve seen folks muscle up and keep going, especially warriors like myself.

My wrangler, Mike, and I have been calling serotonin the Drug of the Month. For us, it’s what creates emotional balance.

We apply pressure and then we see a release and subsequent licking and chewing.

But, now, how am I seeing emotional balance?

It’s the softening, the head and neck relaxing. They often turn and look back at the hip. 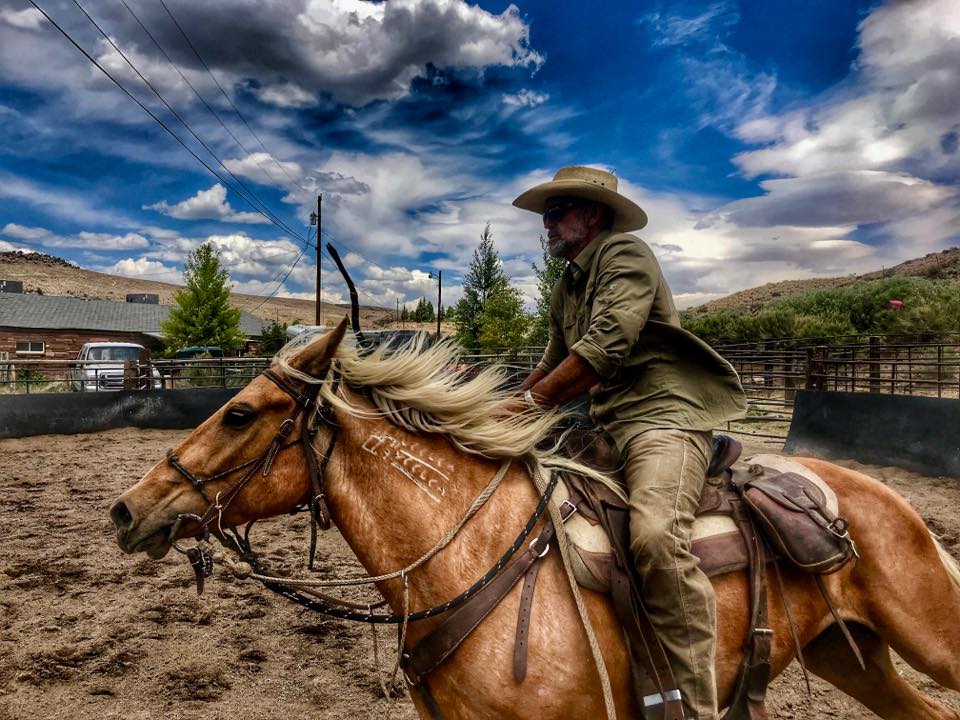 I think serotonin is there when the horse is mentally engaging. It’s like the horse is doing a playback or review of what happened and finding a mental balance after coming out of a fight-or-flight situation…Whereas when dopamine (licking and chewing) is onboard, there still may be some tenseness.

The next state that we watch for is when we allow the horse to seek mental safety…their alarm system is almost completely turned down. They seem to say, “Nothing is happening next.” It’s not, “now what?”

Dwell time is super valuable. It may be involved in a 30-minute training experience or over the course of days or even months. I’ve left horses with good training experiences and after six months, I can get back quickly to where we left off. 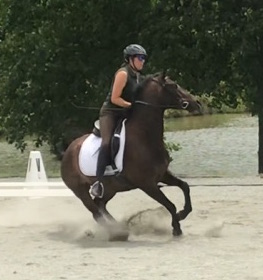 I started working with a nice, three year-old Welsh-cross dressage prospect last summer.  She was easily agitated, bothered, and crooked. Her crookedness was due to a mental kink, not any physical defect: when she became bothered by my teaching something new and something she didn’t understand, she’d become crooked and unbalanced (throwing a shoulder or hip out) and use her shoulders as an anchor to buck or bolt. She would explode due to frustration, just from a simple request to turn left or stop straight.

My temptation would be to fight with her and make her do as asked. From a human point of view, they were simple requests. But when she became agitated, I nonetheless backed off. She took some time to relax, and she worked on the edge of trouble for a good three months. 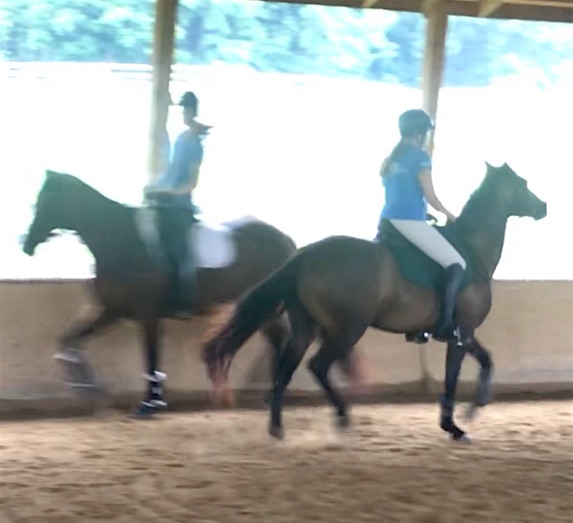 Anytime she got upset, I backed off and worked on something simpler and wait for relaxation. I’d look for her to become softer and easier to direct. I’d watch for relaxation, more rhythmic breathing, and a more natural headset.

Over time, she became relaxed. I’d bring an extra horse into the arena while tasking her with a job. I took her off the farm and rode her in groups. After about a month of these “extras,” I took her to her first show.

It was an enormous, rated show. I was a little worried about her being overwhelmed. But she walked calmly past whizzing golf carts, kids crying, horses screaming, dogs barking, and handlers cracking whips. My husband groomed her with the lead rope over her neck in front of the warm-up ring. She was still and quiet.

When I went into our materiale class (a class where young horses ride together to show dressage-prospect), she was the most relaxed and quiet of the group. 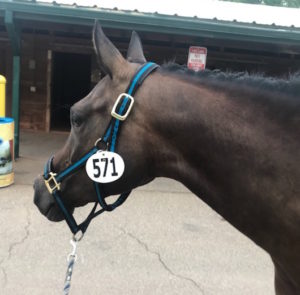 I attribute our success to hundreds of hours of simple, quiet work, and my backing off anytime she was worried.

It’s a method I wasn’t sold on previously. Many would say she needed to be desensitized, to learn to deal with chaos by shutting it out. But at the show, this horse was able to be aware of every detail around her and yet not be bothered. She didn’t ignore things; she just wasn’t concerned. She had plenty of life available for her class and remained sensitive enough to respond to my leg and hand in the ring without extra whip or spur help.

Ray Hunt said, “You leave the life in, take the fear out.”  I was proud to be sitting on a horse with plenty of life and lots of trust. 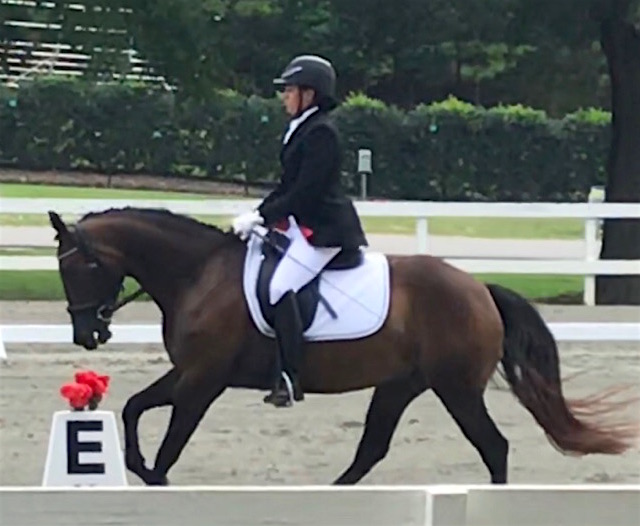